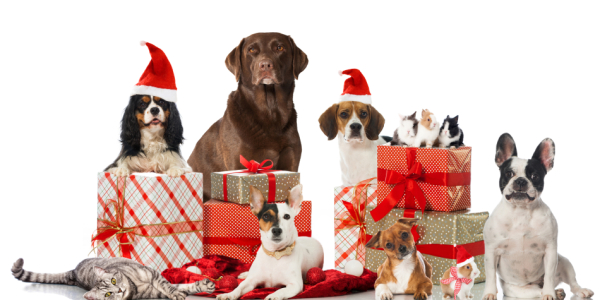 12 Of The Best (Furry) Christmas Memories

Ah, Christmas. The time of year when friends send cards and… the inevitable Christmas letter…

Now, you know the type of thing I mean.  Their son just graduated with flying colours at the age of 12, their darling daughter just passed grade 6 on the flute and she’s only 4…. they redecorated their summer home in the Loire Valley and are heading off to Lapland for Christmas. Ah, the joys: the fun: the laughter.

So, inspired by a sense that reality must prevail – here’s a brief summary of some of my best and most poignant Christmas moments with Santa’s furry little helpers from years gone by.

The year my dog ate the turkey. Yes, the whole thing. And no, he wasn’t ill. Even after he washed it down with a whole loaf of bread. (I’ve learned a lot since then.)

The year I stood on a chewed-up nylabone in bare feet. A small thing in the grand scheme, but only those that have suffered a similar fate will have even the smallest inkling of the agony.

The first year I took my registered PAT dog to the hospice to visit his friends there, and he received edible presents from every single one.

The year one of my friends who had a full-on phobia of dogs gave my little crossbreed a dog biscuit from his hand.

The year I had flu and I spent the entire holiday in bed – draped with dogs and cats for company.

The year my Golden Retriever opened every present under the tree while I was greeting my Christmas day guests at the front door. He carefully removed all the wrapping from each one until he found his teddy! I’ve never seen a dog look so happy and settled amidst a sea of Christmas paper, teddy resting on his paws.

The year I opened my front door to find two stray dogs sitting on my doorstep, gazing up at me, looking completely lost but very hopeful. Clearly the local doggie network had told them where to come!

The year I got my Maine Coon kittens! Carnage! And bliss.

The year the very same Maine Coon kittens pulled down the Christmas tree. For those of you that don’t know, Maine Coon cats are, well… large – and also rather ambitious climbers. They thoroughly enjoyed playing with the fairy on the top – that was then on the bottom.

The year my ‘heart and soul’ book ‘Clever Dog’ made it into paperback!

The year I received a card from a grateful client – with more than 20 photos of her previously ‘problem’ dog relaxed and happy in the park, interacting with other dogs. She said she now believes in miracles!

(Not quite there yet, I know, but wishing and hoping…) The year that I have all three of my wonderful dogs by my side, including my beloved ‘old lady’, Tao.  I couldn’t wish for more.